First she is overwhelmed, then she doesn't want to go back home. Yllza attended the Summer Camp in the children's village in 2017 and spent two weeks there that changed her life. Three years later, the 19-year-old returns to Trogen as a group supervisor.

Yllza grew up in Pershefce. The village in northwestern North Macedonia is less than ten kilometers as the crow flies from Kosovo. 99 percent of the population are Albanians. Surrounded by this ethnic homogeneity and grown up in a very conservative family, there are hardly any opportunities for young people to exchange ideas with other nationalities. When Yllza takes part in the Summer Camp in 2017, she is initially overwhelmed by the diversity in the children's village. "When I got there, I cried and wanted to go back home," she recalls. Your current boss Metin Muaremi even speaks of a culture shock. But after just a few days - inspired by the exchange with the other young people and the trusting relationship with the educators - she made an impressive about-face. It opened became more talkative and learned a lot about dealing with conflicts and finding solutions. Metin Muaremi believes that she has completely changed, especially in her way of thinking. “Before, she was someone who didn't care about anything and just enjoyed it. Now she is much more responsible. » The 19-year-old shares this assessment and adds: "I have a lot more positive energy and I have a lot less prejudices against people I don't know." 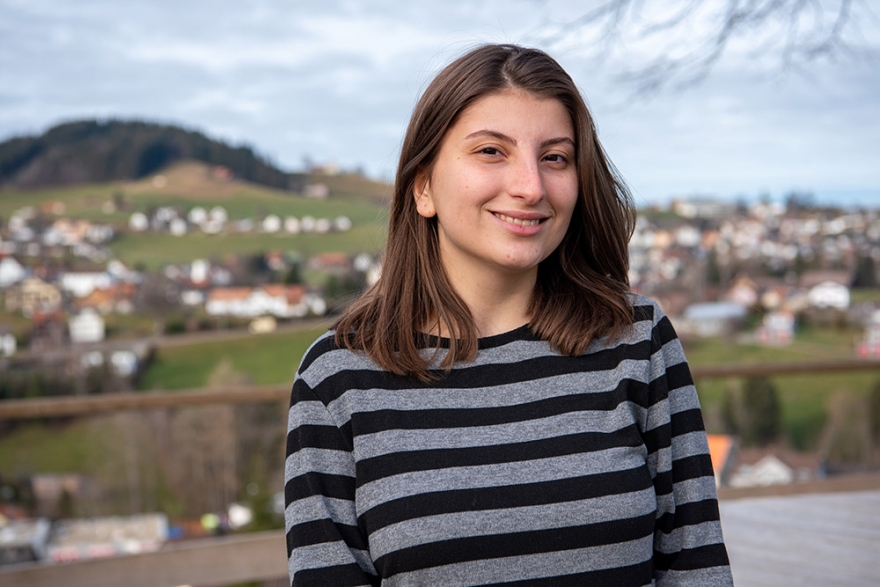 The closer the summer camp came to an end, the more reluctant Yllza was to have to return home. Metin Muaremi, director of the partner organization Center for Education and Development (CED), did not stay in Trogen that year as a companion, but had noticed that Yllza found it difficult to return. When the youth turned to the North Macedonian organization, he offered to help them volunteer. "The summer camp will come to an end, but you can find another way to continue: here in North Macedonia."

"I want to keep this Pestalozzi spirit in my heart."

Yllza kneels at CED and moves from volunteer to youth coordinator. In this role, she is the contact person for all volunteers. Since CED also offers camps for children and adolescents, Yllza can incorporate her own experiences from the children's village into her work. «The time here helped me because I learned firsthand how to deal with children.» When the young adults look back on their stay in Trogen, they keep coming back to the people who have received them so unexpectedly openly. And she raves about the positive energy that inspired her childlike and naive self at that time. "I want to keep this Pestalozzi spirit in my heart."

Passed the test
As director of CED, Metin Muaremi experiences first-hand how Yllza develops personally - how she runs a whole summer camp together with two volunteers, how she deals with people. You see the world differently now, he thinks. "Working in the organization and through her new way of thinking and understanding things has also influenced her society." The shy youth has grown into a confident young adult who has come a lot closer to her goal of returning to the children's village. «When I went home in 2017, I said: I want to go to Trogen again and again.» She is extremely pleased that the time has come. Their enthusiasm to meet Daniel and Pascal again is also great. Those educators who would have ensured

At 19, Yllza is only a little older than the young people who take part in the exchange project in the children's village. Of course, she had already dealt with this in advance, but the group accepted her well. Metin Muaremi explains that the participants deliberately wanted to show not just a perspective of learning or an approach to regulate things. "I may be more authoritarian, but she's friendlier and the children will tell her more than me."

The two also agree that the exchange projects in the children's village have a lasting impact in their home country. The projects would change the way we think, says Yllza. "When I returned, I had a lot of ideas about what I wanted to do or how I wanted to work." For ten years now, CED has brought 40 young people to Trogen for an exchange. "Experience shows that 60 to 70 percent become active citizens and lead organizations at home," says Metin Muaremi. He cites national, ethnically mixed student organizations, reading clubs or web radios as an example. "If someone who was part of us goes on and continues to work in a different way, that motivates me a lot."

Copyright and owner of the article: Pestalozzi Childrens Foundation